With Christmas craft planning getting underway I have been looking for fun drop in crafts to do at our Christmas open day at the Craft Room. Soap making is something I always wanted to try so I gave it a go.

So, there’s one thing about soap making from scratch – and that is lye. All soap is made with lye, and it’s a nasty thing to handle – you need serious gloves, face mask, well ventilated areas (preferably outside), so not really Craft Room friendly, and by all accounts it’s something you need to practice a lot. Cold process soap also needs a long time to set and cure. OK, so, that’s out then!

Fortunately there’s an alternative – and that is melt and pour soap. Here all the lye handling bit is already done and you get a ready made soap base, which you can melt and then add all kinds of goodies – fragrances, additives, colour, pop it into a mould and wait for it to set.

So, I tried out three different bases in my experiment, Stephenson shea butter, Stephenson goats milk and Glorex glycerine with aloe vera. 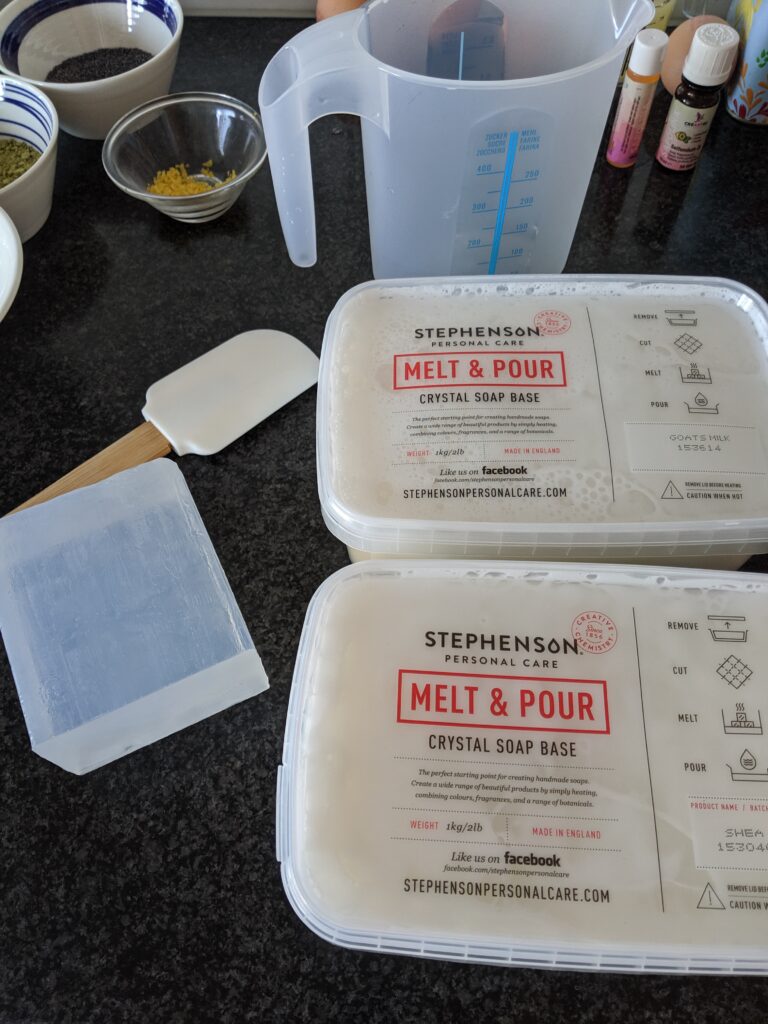 And then of course there are the additives – here I wanted to try out a few different things I saw on Pinterest, as you do, so I gathered together a few random things I had around my kitchen and garden.

Below, from the top, clockwise, we have: lavender (from my garden), poppy seeds, oats, dried lemon balm (also from my garden), pink Himalayan rock salt, honey, lemon zest, and in the middle is some green matcha. I also had a tiny bag of dried edible flowers not pictured. I also had lemon, lavender and coconut fragrance oils. And I had pink, blue, red and yellow soap colours. 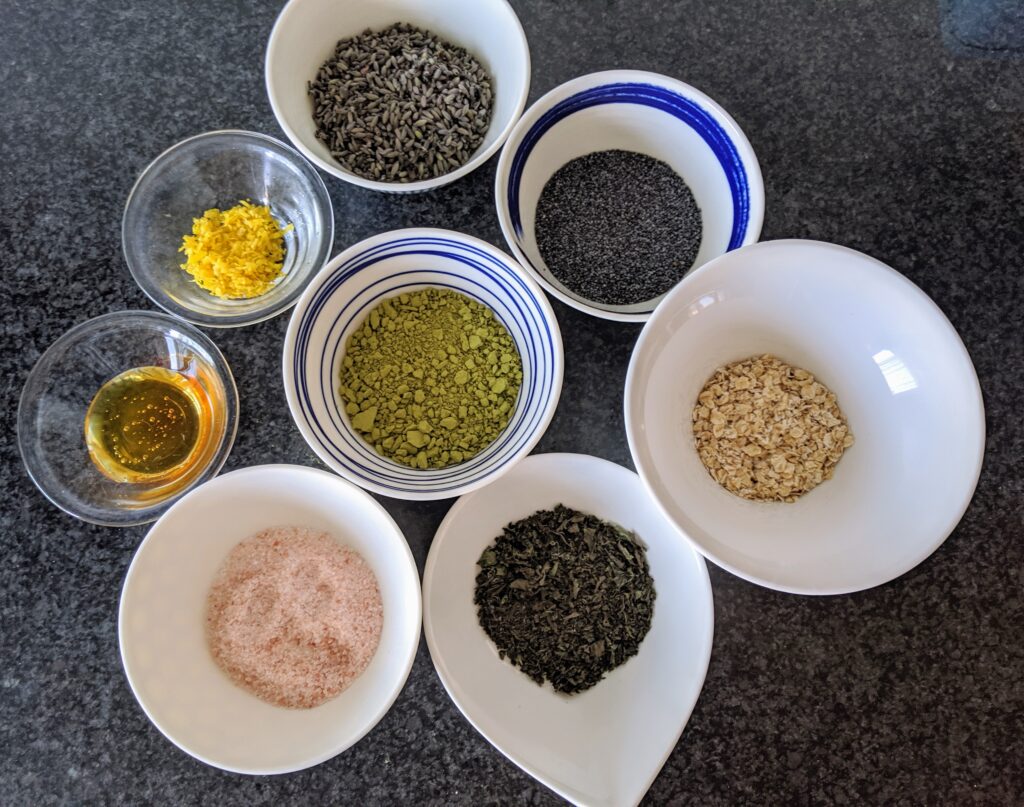 In the end I didn’t use the dried lemon balm as I liked how the lemony soap was with just the zest in it.

And the moulds – I bought a rectangular and a round silicon soap mould, and in my cupboard I also had some silicon cupcake moulds and some heart shaped ones too – I never really used them (I mean who wants a cupcake without a wrapper on?) so I was happy to sacrifice these to soap. 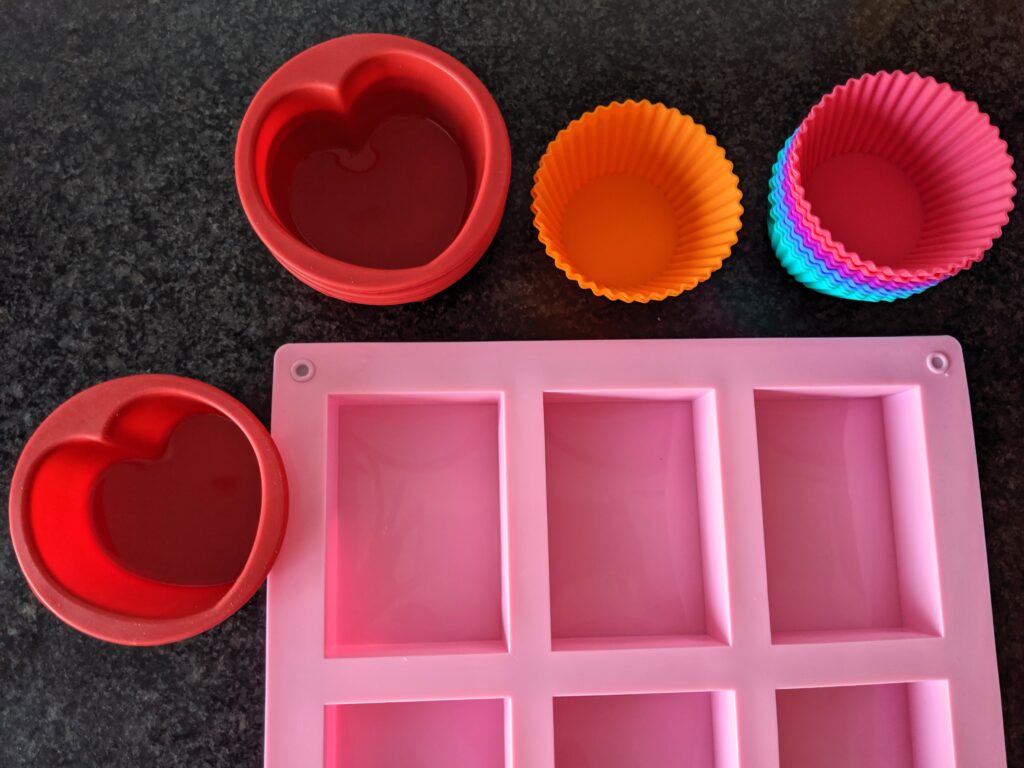 So, all you do, is chop up some of the soap base and melt it – I put mine in a plastic jug and microwaved it on 600w for 15 second bursts – I was only using small amounts – basically enough to make one bar, so it melted really quickly – about 30 seconds total was enough. 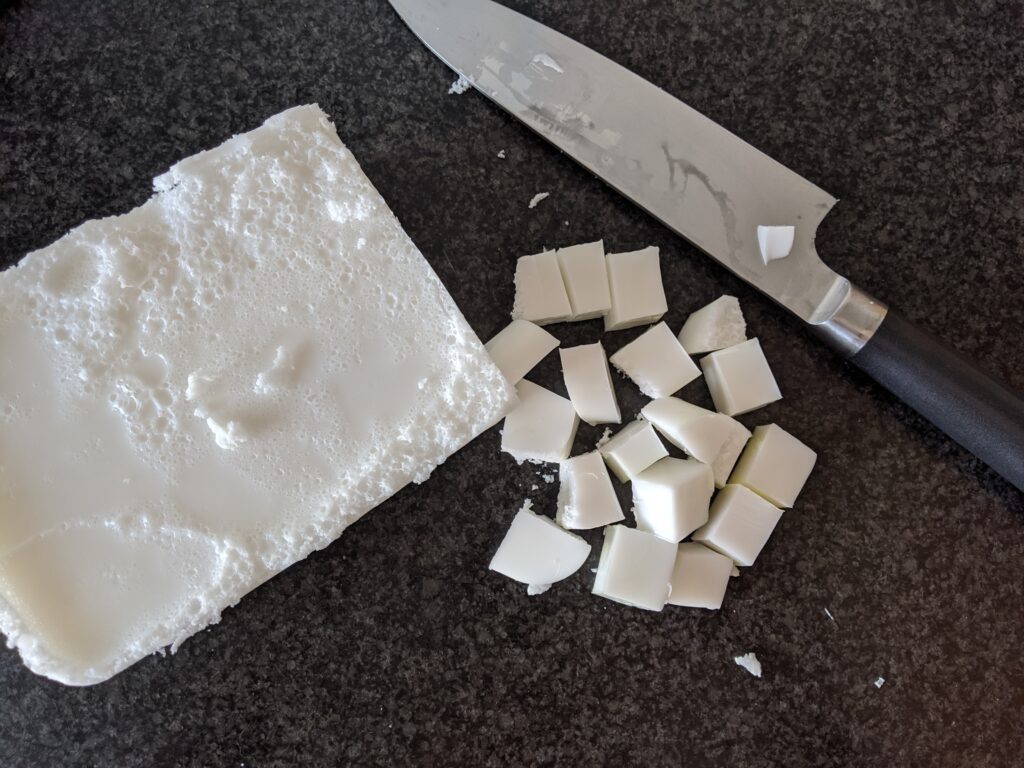 Here’s what went wrong!
– I put too much pink in the pink one. I wanted a nice pale soap-like colour, but I actually got a bubblegum bright pink. And I think a rose scent would have suited it better, but I didn’t have one, so making do.
– I didn’t put much fragrance oil in because I was only working with tiny amounts and didn’t want to overpower, but I think I probably needed more as all the soaps are only very slightly perfumed.
– The matcha clumped together a bit – it did get better the more I stirred but I don’t know if it all really mixed in. I guess I could have sieved it in with a tea strainer to sort that out.
– The lavender… now, my lavender is quite grey coloured and to be honest in the finished soap I didn’t like the way it looks – I can’t help but thing it looks like it has bugs in it which is not really what I was going for! It smells divine, but I don’t like the look.
– With the rock salt I was worried it would just dissolve in the soap so I sprinkled it on top after I’d poured it in the mould after a couple of minutes. But the salt didn’t stick to the top so most of it just fell off when I unmoulded them.

My favourites are the lemon and the honey and oatmeal. I love how they turned out. My least favourite is the pink one – because it’s just too pink. In the picture below it actually looks quite pale – it’s not – it’s bubblegum!

So, in conclusion I think I will get some other fragrances and give it a go at the Christmas Craft Room event on December 7th. 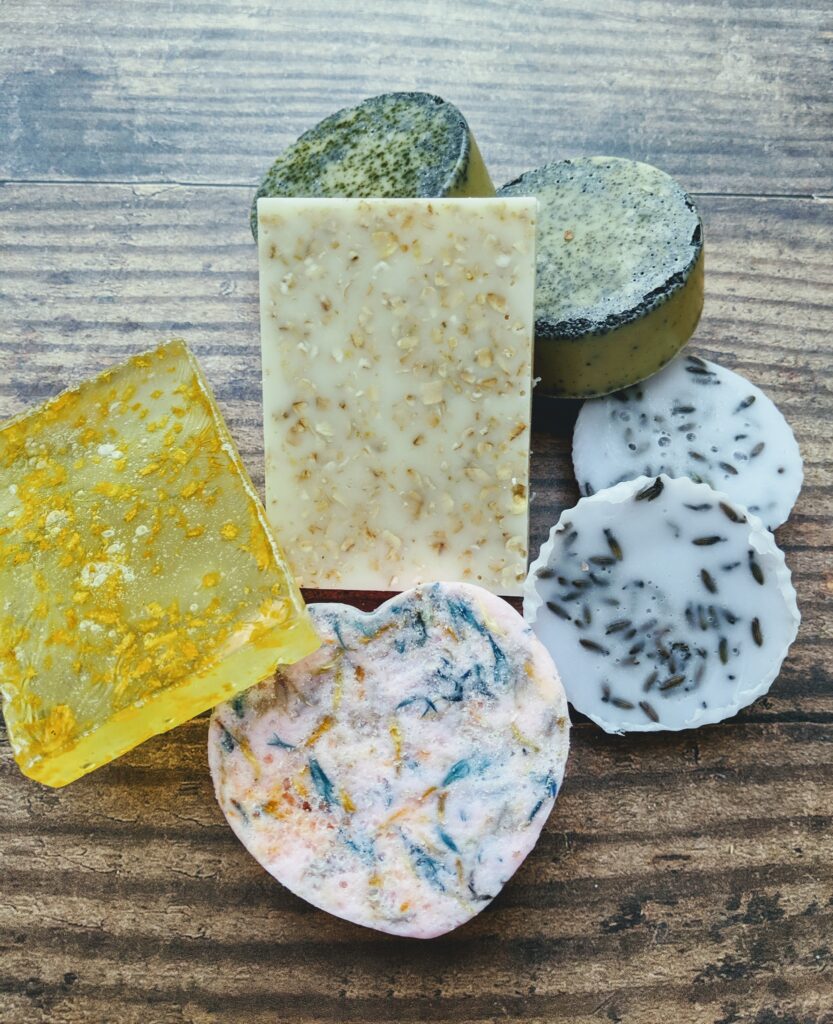 This site uses Akismet to reduce spam. Learn how your comment data is processed.

Due to the announcement of the Swiss authorities closing non-essential businesses, the Craft Room will be closed from the 18th January until the end of February 2021.
Refunds or reschedules will be offered to all persons who already booked a class – I will be in touch with you as soon as possible, in the meantime if you should have any questions please contact me via the contact page or via Facebook / Instagram direct messenger.
Please be advised that although classes after that date are currently bookable, this could change at any time.